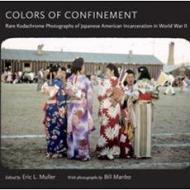 Bill Manbo and his family were forced from their Hollywood home into the Japanese American internment camp at Heart Mountain in Wyoming. While there, he documented both the bleakness and beauty of his surroundings, using Kodachrome film, a technology then just seven years old, to capture community celebrations and to record his family's struggle to maintain a normal life under the harsh conditions of racial imprisonment. Sixty-five stunning images from this extremely rare collection of color photographs are showcased.

The subjects of these haunting photos are the routine fare of an amateur photographer: parades, cultural events, people at play, Manbo's son. But the images are set against the backdrop of the barbed-wire enclosure surrounding the Heart Mountain Relocation Center and the dramatic expanse of Wyoming sky and landscape. The accompanying lecture illuminate these scenes as they trace a tumultuous history unfolding just beyond the camera's lens, giving the audience insight into Japanese American cultural life and the stark realities of life in the camps.