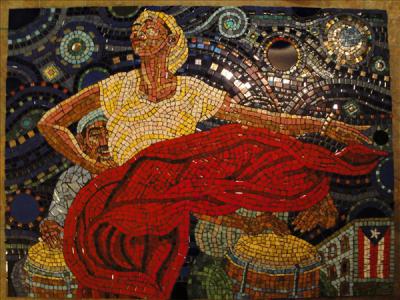 The museum has recently undergone a series of major renovations and stands as a  testament of the gentrification efforts taking place in East Harlem.  As part of its biennial celebration, LA BIENAL 2013,  El Museo is offering museum visitors a special after hours opportunity that includes gallery talks, special performances, exhibitions, and a lively mix of soul, afro beat and house spun by resident DJ 5ifty5ive and Les Carbonell.  The event called "Radiance", billed as the "ultimate end of summer party", has been featured in Time Out New York, New Daily News, and other publications. "Radiance" has quickly become a destination for museum and non-museum goers alike.
August 28th features a special gallery talk with legendary artist Manny Vega entitled "Artists Talk Santos in the City: Manny Vega"
The event is free and open to the public.
Please register  via this link.  The Brown Club in New York will be checking in alums at designated area prior to the event.  We will also be providing name tags to help us identify one another.
For additional information, please contact kwame@alumni.brown.edu .