Slavery's Past and Its Continuing Futures: Unity Event with Anthony Bogues & Paul Gardullo

Join Dr. Anthony Bogues, Director of the Center for the Study of Slavery & Justice (CSSJ) at Brown University and Dr. Paul Gardullo, Curator at the Smithsonian's National Museum of African American History and Culture (NMAAHC) for a discussion about the work of each institution sharing the history of slavery and its continuing impact on our world today. 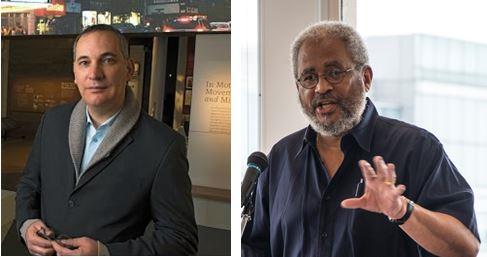 The Center for the Study of Slavery and Justice (CSSJ) is a scholarly research center with a public humanities mission. Recognizing that racial and chattel slavery were central to the historical formation of the Americas and the modern world, the CSSJ creates a space for the interdisciplinary study of the historical forms of slavery while also examining how these legacies shape our contemporary world.

Anthony Bogues (Ph.D., 1994, Political Theory, University of the West Indies, Mona) is a writer, scholar, curator, and the Director of the Center for the Study of Slavery and Justice; Professor of Africana Studies, Royce Professor of Teaching Excellence (2004-2007); and Asa Messer Professor of Humanities and Critical Theory. He is also an affiliated faculty member of the departments of Political Science and Modern Culture and Media, History of Art and Architecture and an affiliated faculty with the Center for Latin American and Caribbean Studies. Bogues' major research and writing interests are intellectual, literary and cultural history, radical political thought, political theory, critical theory, Caribbean and African politics as well as Haitian, Caribbean, and African Art. He is the author of Caliban's Freedom: The Early Political Thought of C.L.R. James (1997); Black Heretics and Black Prophets: Radical Political Intellectuals (2003); and Empire of Liberty: Power, Freedom and Desire (2010). He is the editor of From Revolution in the Tropics to Imagined Landscapes: the Art of Edouard Duval-Carrié ( 2014 ) as well as two volumes on Caribbean intellectual and literary history: After Man, Towards the Human: Critical Essays on Sylvia Wynter (2005) and The George Lamming Reader: The Aesthetics of Decolonisation (2011). Additionally he has curated shows in the United States and South Africa and has published numerous essays and articles on the history of criticism, critical theory, political thought, political philosophy, intellectual and cultural history as well as Haitian Art. Bogues is an associate director of the Center for Caribbean Thought, University of the West Indies, Mona; a member of the editorial collective for the journal Boundary 2 and an honorary professor at the Center for African Studies, the University of Cape Town, South Africa. He teaches courses on Africana political philosophy, cultural politics, intellectual history and contemporary critical theory and comparative literature of Africa and the African Diaspora as well as courses on the history of Haitian society and art.

Paul Gardullo is Museum Curator and Director of the new Center for the Study of Global Slavery at the Smithsonian Institution’s National Museum of African American History and Culture, which opened to the public in 2017. He curated the inaugural exhibitions “The Power of Place” and “Muhammad Ali: A Force For Change” and was involved in building collections as well as conceiving, and curating many of the museums inaugural exhibitions since 2007. Paul also serves as Co-Director of the Slave Wrecks Project, an international network of researchers and institutions that investigates the history and afterlives of the global slave trade through the lens of maritime archaeology. Trained as a historian, Paul received his Ph.D. in American Studies from the George Washington University in 2006 and was a postdoctoral fellow at Yale University’s Gilder Lehrman Center for the Study of Slavery, Resistance, and Abolition before joining the Smithsonian.

Gardullo’s most recent publications include contributions to the 2016 books From No Return: The 221-Year Journey of the Slave Ship São José and Dream A World Anew: The African American Experience and the Shaping of America, both published by the Smithsonian Institution. His article “Angola Prison and the Slavery to Prison Continuum: Collecting and Preserving around a Conflicted Site of Conscience” is forthcoming in the Forum Journal. Other articles and books and exhibitions include “Spectacles of Slavery: Pageantry, Film and Early Twentieth-Century Public Memory;” in Slavery and Abolition; “Just Keeps Rollin’ Along”: Rebellions, Revolts and Radical Black Memories of Slavery in the 1930s” in Patterns of Prejudice; Smithsonian Civil War: Inside the National Collection; The Scurlock Studio and Black Washington: Picturing the Promise; and Oh Freedom! African American Civil Rights Movement and American Art at the Smithsonian; He writes, advises, lectures, and curates on a number of topics related to museums, race, history, culture, and memory; and his current book project, Slavery in American Cultural Memory, is under contract with Oxford University Press.

The first 50 people to register will receive a package of limited edition CSSJ thank you notes!